The hunting season in Namibia is from 1 February until 30 November each year. Hunting takes place on the farm as well as other areas, as our farm forms part of the Etosha Conservancy in the northern part of Namibia. The main species in this area are Eland, Kudu, Oryx, Hartebeest, Impala, Blessbuck, Springbuck and Warthog. Other species like Leopard, Cheetah, Damara Dik-dik and Black-nosed Impala can also be hunted here. Namibia is one of the very few countries where one can still hunt Cheetah. Hunters can also sit at one of the various hides and watering holes on the farm. We offer mainly traditional stalk hunts but also hunt from hides. Every hunter is permitted by law to export two trophies per species. To bag a good representative specimen please plan 2 days for such a trophy. Wounded game that could not be retrieved after a thorough search has to be paid in full according to the regulations of our Ministry of Environment. Hunting normally amends a half an hour before sunrise until a half an hour after sunset. The normal hunting day starts early (06h00) with coffee and toast and then we leave for the hunt in a hunting vehicle or per foot. A midday brunch is enjoyed at the lodge, after which we will relax until approximately 15h00. 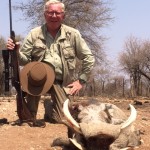 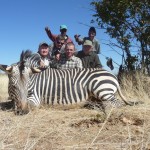 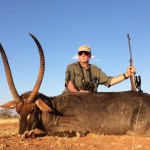 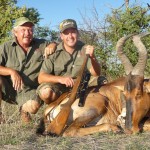 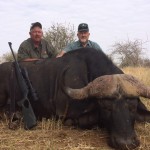 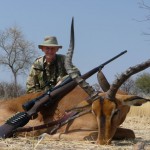 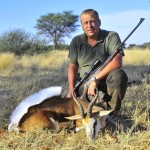 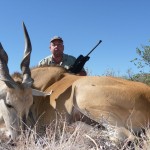 Namibia has a long tradition of hunting with a bow and arrow. Practiced by various rural communities; the most well-known of these is the Kalahari Bushmen, who traditionally hunts with poisoned arrows. Bow-hunting for trophies in its modern form was legalized during 1997 and is thus a recent development. The predominant drive behind this development was the ever-growing trophy hunting sector. Modern-day trophy hunters, who would like to hunt in Namibia with a bow, can select from a large variety of registered Bow-hunting outfitters. Due to Namibia’s natural habitat, types of game and seasonal changes in vegetation, bow hunting requires the highest standard of hunting skills and ethical behavior. Bow-hunting in Namibia is practiced using a number of techniques. Hunters may lie in ambush in areas frequented by game, or they may stalk their prey.

Blinds: Bow hunting from blinds is preferred during the Namibian winter months, June until August and the drier months September and October. The majority of hunting takes place from permanently constructed blinds i.e. ground blinds, tree blinds and temporary pop-up blinds on game trails. Animals have to be within 20 m -30 m from waterholes and salt lick stations, relaxed and unaware of the hunter. Normally only “side-on” shots are taken. Blinds are spacious, with overhead roofs, and ports are adjustable to suit both sitting and standing archers. Animals are bagged regularly by using this method. Stalking: This form of bow hunting remains a challenge and is preferred during the green season months, February until May as sufficient cover exists and the green bush is softer on the foot and reduces noise while stalking. Spot and stalk hunting is also used for the “more difficult” game species or those that do not frequent waterholes. Due to the difficulty of achieving the above criteria, bow-hunting in Namibia is technically a highly selective sport and requires above normal self-discipline and physical fitness. Surrounding game species are disturbed very little and are often not even aware of the hunt that is taking place.

It is illegal to hunt any of the above-mentioned Dangerous Game species with the bow and export the trophy on a Special (Rifle) permit from MET, Ministry of Environment and Tourism. 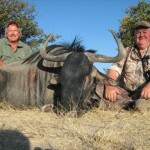 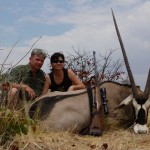 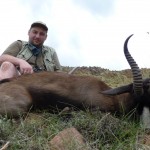 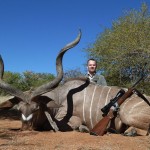 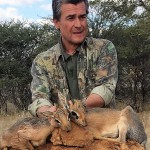 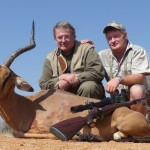 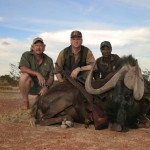 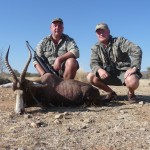 Hillendale Game Ranch is situated in the north-eastern part of Namibia – only 400km from Windhoek, the capitol of Namibia. Follow the tarred B1 through the towns of Okahandja, Otjiwarongo and then Outjo. 10km Outside of Outjo, you turn left to Kamanjab and 50km from the turn-off, you turn left again at the 3236 gravel road. The main entrance gate is 5km on the left. Hillendale is a pure hunting farm and forms part of the Etosha Wildlife Conservancy. The Etosha Conservancy consists of over 400 000ha in which various game- and bird species are found. Rare species like Cheetah, Damara Dik-dik, Leopard, Black-faced Impala and Mountain Zebra can also be found here. Vegetation varies from open grass savannah with scrubs and Mopani trees to the mountainous areas. The nearest town is Outjo – also known as “The Gateway to the Etosha National Park”. The name “Outjo” is variously translated as place on the rocks or little hills referring to the area’s hilly topography. In Herero language “Outjo” means place of the cone shaped hills. This town has a population of around 11 000 and an altitude of 1,200m. The lodge consists of a main open-planned lapa and individual thatched chalets, which maintains preferable temperature and contributes to a truly African atmosphere. These chalets are designed for your convenience and comfort and are situated 50m apart to give each guest his own privacy, with magnificent views of the beautiful bushveld. Each chalet is en-suite with a shower and equipped with modern necessities. At the swimming pool you can enjoy the tranquil African climate. In the main lapa, which is decorated in a truly African flare, we serve all our scrumptiously prepared meals and also offer a bar service with the finest South African and Namibian wines and beers. Here you will also be able to stay up to date with breaking news around the world on the satellite TV. Bedding is changed twice weekly and rooms made-up daily. Laundry service is available on request and payable per item. Johann’s wife, Imke together with her team prepare the meals. Special care is taken in the preparation of the best traditional Namibian dishes, as well as a variety of other mouth-watering meals. You will experience these uniquely Southern African tastes that are sure to be a culinary treat!

Etosha-Road-Map Area map   You can start the day with a game drive on one of our equipped vehicles, where you will be able to see the vast variety of antelope, birds and flora. After a leisurely buffet breakfast, you can lounge around the pool and soak up the African sun. Hiking, swimming, bird watching, game and sightseeing drives, relaxing sunbaths, experience sundowners & breath-taking sunsets and in the evenings barbecues at the campfire. Daytrips can also be arranged to the Etosha National Park, the Vingerklip, a traditional Himba Village, a museum at Otjikondo, a cheetah breeding farm, Outjo and a crocodile farm in Otjiwarongo. Guests can also enjoy our walking trails as well as the game drinking at the waterholes and various hides in the veld. To end a glorious day, a big log fire in our boma, makes you truly feel a part of Africa!